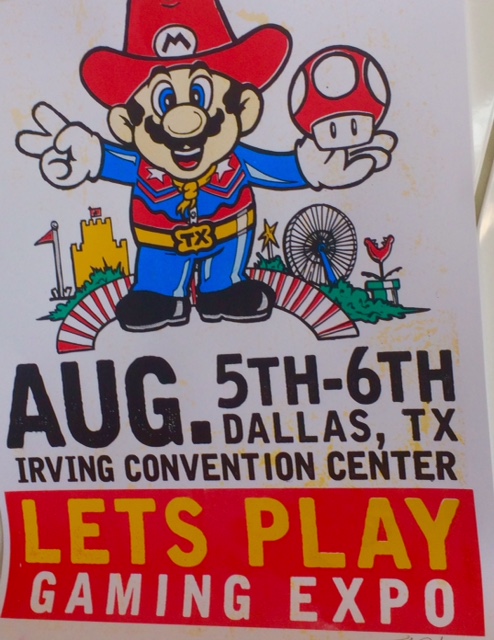 Last Sunday, I had the privilege of attending the third annual ‘Let’s Play Gaming Expo‘ in Irving, Texas. The expo is self-described as ‘one of the most interactive conventions in the land, celebrating all of gaming, be it board, card, or video.’ 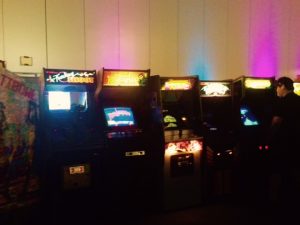 This seemed to be the case as I wandered through rows of retro arcade systems, glimpsed the Guitar Hero Championship finals, and watched individuals power through a Pokemon Gameboy Tournament in the free play area. There was even a real-life scavenger hunt that took place the entire weekend. Board games ranged from Descent-level to classic party games like Operation. 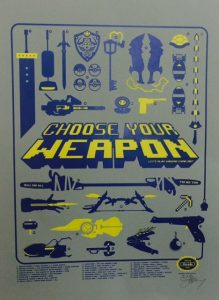 Tickets went for around $20 a pop, an absolute deal when it comes to convention-attending.

While the attractions, people, and games were all top-notch, the highlight of my day was sitting down with Kalen Nelson, one of the co-owners of the convention itself. He was very easy to speak with and explained in great detail the purpose of the convention, the mission behind it, and what their goals are for the future.

Below is a lightly-edited transcript from the interview.

Me: So you’re on the board for this convention.

Kalen Nelson: Yes. I’m one of the co-owners for Let’s Play Gaming Expo.

How long has it been around?

This is our third year.

Do you expect it to grow every year?

So far that’s been the case, and it doesn’t look like there’s any sign of that stopping.

That’s awesome. What was y’all’s general idea when you came up with this?

We had just gotten back from another gaming convention, and we’d had a good time. We really enjoyed it, but we thought to ourselves, ‘hey, you know, I think we can do a little bit better.’ And so we just started talking about it. ‘Hey, maybe we can do this. Hey, I’m an arcade guy, and I own a lot of arcades. Maybe I can bring that in.’ ‘Hey, I own a lot of consoles. Maybe I can bring that in.’ And it was just a bunch of people getting together and being like, ‘hey, we can do this.’ And then we put it on the first year, and it was very successful, and we haven’t looked back since.

How many owners are there?

What do you think is different about this game convention versus others? I know it’s a ‘Let’s Play’ type of deal, but in your opinion…

The biggest thing we try to emphasize is the accessibility; the interactivity of it. One of our biggest focuses is being family-friendly and making sure that anyone can come in and wherever they sit down, there’s a game to play. Because that’s the whole point of it – ‘Let’s Play.’ The whole thing is, we want people to enjoy playing games with each other. And this gives them the opportunity to do so; just come in and play games that maybe you’ve never seen, never heard of before; as well as all your classic favorites or even the modern hits.

I did notice y’all’s convention is quite a bit cheaper than other game conventions I’ve been to.

That goes back to the accessibility part. We want to make sure it’s fully accessible for almost everyone. We want it to be that way for vendors, for artists, and for developers as well as the general attendees. We don’t ever want the price to be what blocks somebody out of coming to our expo. 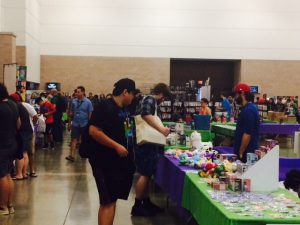 Okay. That’s very awesome. Here’s a personal question – if you could have anybody come here, like a developer, who would it be?

Oh! *Laughs* This is such a hard question as far as developers go! I actually work in the industry myself; I work for Robot Entertainment as QA for my full-time job.

But for an actual developer… gah, it’s so hard. Personally, I’d love to have Ghost Story Games out; I think that’s what their new studio is called. The ex-Irrational Studios guys that left after Bioshock Infinite was made. I’d love to have Ken Levine and his studio out.

Yeah! They’re amazing; I hope they come here one year. So does Robot have a booth out here?

They don’t have a booth here, but they are one of the sponsors of the expo. They’ve actually got some commercials running in our Low Tier City stream that’s going on right now on Twitch Tv, as well as providing bag inserts for all the attendees. So if you get a bag, it’s got a code for one of our heroes in it as well as a poster for it.

Okay. That’s very cool. Where do you see the convention in five years?

In five years? That’s such a…

…challenging question, because when we started it, we had a soft estimate of ‘maybe we’ll get 800 people our first year.’ And then we got 1500.

And then next year were were like, ‘maybe we’ll get 2000.’ We hit 3000. And this year, early numbers are already looking to far surpass what our initial expectations were.

I would say so, just from looking around at the convention on a Sunday.

Exactly. So it’s been growing at a tremendous rate and we’re not sure when it’s going to either stop growing or if it will peak or if it’s just going to keep growing at this upward trajectory, because… each year we’ve opened up more space to try and accommodate more people to be able to come, because each time it’s been, ‘maxed out the venue; maxed out the venue; maxed out the venue. We just moved from the Plano Center to the Irving Center here because the Plano Center just became too small for us. We couldn’t fit the entire Expo there. And… we’ve already seen astronomical growth just from having the ground floor. So next year, maybe it will open up to the next floor; open up for a third day. We’re still figuring all that out.

…But that’s the next step. Honestly, it’s hard to look five years into the future, because we’re having difficulty looking even a year ahead. *Laughs.*

*Laughing.* Got ya. Yeah, and that’s totally understandable. So, do you feel like this has been a really positive experience for you?

Absolutely. It’s been a great experience. We all do it as part-time, really. It’s a full-time job that we’re doing part-time because each of us has jobs that we do to pay our way. But we didn’t get into this for the money; we got into it because we enjoy it.

Exactly. The weeks leading up to it, and then the few days right before are super stressful; you know. Any time something goes even a little bit wrong, it’s like everything feels like it’s falling apart. But at the end of the day, it’s always a super positive, super enjoyable experience.

A scheduling issue, or a game that we were going to use for a tournament breaks down, or… there was one… *laughing,* there was one game that we powered up on the beginning of Friday to make sure everything worked… one of the tvs actually shot smoke out the side.

…And was about a few seconds away from actually catching on fire, so that was interesting, uh… you know, literal fires to put out. But just little things like that. One person being belligerent, or, you know, raising complaints and we’re trying to get them taken care of. Any time that things like that happen, it’s always like, ‘Oohh my gosh; I gotta take care of this right now!’ But, it always ends up being a positive experience. We’ve gotten overwhelmingly positive feedback from the community for what we do, and we’re super excited to keep giving back to them. 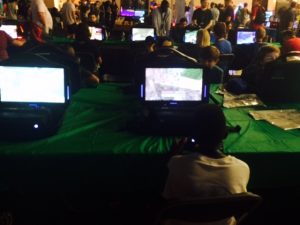 Do you personally know all of the other owners?

Yes, we’re all friends, we’ve gotten to be pretty close friends over the years, and we keep working at it and we keep going. We have little scuffles and fights here and there, but nothing major.

We keep at it.

So, were the seven of you… were you just sitting around talking, like, ‘let’s create something…. a game convention that we would actually enjoy ourselves’, or…? I’m trying to wrap my mind around that; it’s fascinating.

That’s how it started. I wasn’t one of the original co-founders, but I was one of the original volunteers, and I just stuck with it so long that I got a share of the company. But the original guys, when they came back from that expo, they were like, ‘we enjoyed that, but there are things we can improve on.’

Is everybody that was an original founder still around?

There is one additional founder that’s no longer a co-owner, but he’s still very much involved with the expo and he’s a great guy we’re all friends with. I think he may still have some ownership but not at the active level that the rest of us are.

But you can still say that pretty much everyone who was an original founder stuck around in some way.

Absolutely. We’re all working toward the same goal.

And who are you most excited about that’s attending this particular expo?

To this one? Wow… the talent that we brought out… developer Warren Davis. He’s the guy who created Q*bert as well as worked on the systems that you use to digitize people and put them into games; for example, Mortal Kombat and games like that, where it was the real people but digital versions of them. Having him out has been an absolute treat. He’s a great guy; he’s got a wealth of stories and knowledge to tell, and it’s just been super great to have him down here.

That’s awesome! So, is everyone who is a co-owner… are y’all all involved in the industry?

No, actually. One of us owns a game store, I work in the game industry, one of us works in a production studio, one guy works on cars for a living… we’re all over the place. 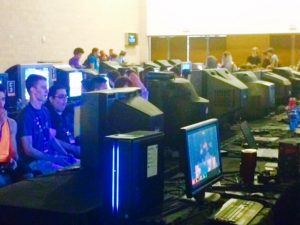 Okay, one last question before I let you go. Are there any new games that have been presented today that you’re interested in?

Oh, absolutely! We have sixteen indie developers out there right now that are promoting either games that they’ve just recently released or games that are coming in the future. So many of them just look awesome. Before I came over to talk to you, I’d actually just sat down and played Solar Purge, which will be coming out next year, and it’s very sci-fi. It’s a  Diablo-esque game, and I just had a blast playing it.

Very cool; I’ll definitely check that out. I really appreciate you talking to us at Maggamer.

Thank you so much.